There has been a (fairly) recent announcement of a programme of road-building. Other blogs talk about it here and here.

This is not really a proper post, but I have a choice between the perfection of a lengthy and closely-argued essay (featuring “induced demand” and SACTRA and whatnot) which will get posted, oooh, possibly never, and a quick snippet now. I’ve gone for the snippet, of course, and I’m about to go for a guilty confession.

There’s a protest rally, this Saturday, at Crowhurst in East Sussex (where they’re currently having a spot of by-pass bother). I really ought to go because I do feel just a little bit strongly about this. The trouble is I absolutely hate being in a crowd, especially in hot weather (it provokes migraines and I don’t tan, though sometimes the freckles join up to create a pointillist effect). And it takes four hours to get there by train – if I was still in London, then perhaps… Anyway I’ve gone and donated the cost of a return train fare from Bristol to the Campaign for Better Transport.

As explained previously, I am not an activist I am a sitonmybumandthinkivist.

I put this sticker on the bike. Then I tried to take it off because I’m generally rather weedy about making political statements in public. But it won’t remove easily. Anyway, it might make it less nickable maybe? 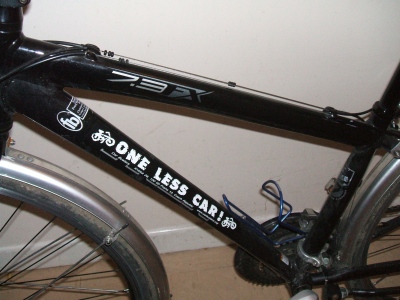 And why would people take it as agressive anyway? “Who are all these people?” drivers moan at a spot of unexpected congestion – so surely everyone agrees that the fewer the better?

Getting shouty on the internet decorates no cakes

Polite indignation on a blog steams no broccoli

Unfortunately, the only thing that might go some small way to cooking your dinner is real world politics. Here is some modest activism from Bristol: 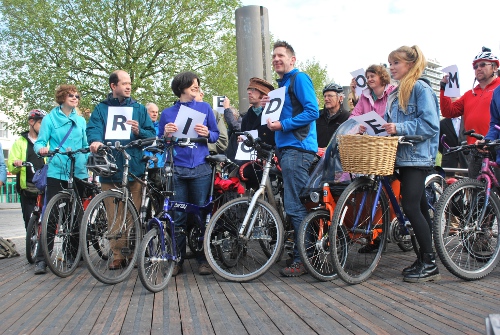 These people are from the local cycling campaign, which has just launched something called the Bristol Freedom to Ride cycling manifesto. The idea is to try to create a push, to assist a mayor who is basically sympathetic to active travel by showing support, to let loose some bold practical suggestions that can be taken up and brandished. “Thousands already cycle but our Council needs to provide a comprehensive cycling network” it sez ‘ere. Yes.

[btw I haven’t abandoned this writing project – I’m just a bit engaged with other aspects of life, but should be back in July]

So why did I enjoy it? Well, roomfuls of cyclists tend to have nice energy about them. I used to do a martial art and it feels like that – it is I suppose just being surrounded by people who are unpretentiously fit. And it’s nice being surrounded by people who you knowaren’t going to plunge into Tedious Car Conversations at the drop of a hat. (On the downside, I suppose it was rather undiverse – though it was somewhat less middle-aged and mono-male than I was expecting).

A bonus was that the structure of the day catered to my natural fidgetiness. It started at 9:30 with a set of mini-field trips to look at the local roads with specific reference to cycling infrastructure. That is to say, half of the morning was spent walking or cycling. Then when the indoor talking started, it commenced with a discussion format which involved attendees talking to each other, then getting up every so often and talking to a new bunch of people. In other words the morning was partly spent in outdoor physical exercise, followed by an indoor activity at which it was almost completely impossible to fall asleep.

The afternoon was, of course, speakers, but I was still surprisingly perky. There was the launch of the cyclescape website, some quite technical political stuff which I didn’t entirely follow and there was also … well no fights broke out, but I gather there had been a few skirmishes in the morning session.

Ok. This blog is shy and retiring. If it was a bird, it would be a small brown thing that goes “pheep” occasionally. Nevertheless, part of my purpose (inter alia*) is to address an imaginary reader who is innocent of the culture of cycling activists, and so I need to outline the debate about cycling infrastructure. This is usually called “integration versus segregation” but this is a misleading phrase and one of the annoying things about this particular Heated Debate is that both sides have consistently misrepresented each others stance. In fact, this issue is slowly coming to a semi-consensus, but it gave a thorough airing to lots of important points along the way, so is worth a few words in the next post.

You’ll see from the ‘table of contents’ to the right that I’m intending to write a fair bit about something called ‘behaviour’. Don’t run away with the wrong idea though. I’m not going to suggest that the transport woes of society can be solved by using cunning social psychology to persuade everybody to behave differently.

There is rather a lot of evidence that the direction of causality in social life is not as straightforward as we think. If more people walked and cycled then walking and cycling would become easier. If the built environment were designed better then more people would walk and cycle. If the cultural environment assumed that active travel was the default then more people would travel under their own muscle power. But if enough people decided to walk and cycle then the cultural environment would assume it was the default and a better built environment would be put in place. Oh. We’re back at the start – I thought you knew where you were going? Here is a diagram of this, helpfully provided throughout our towns and cities: 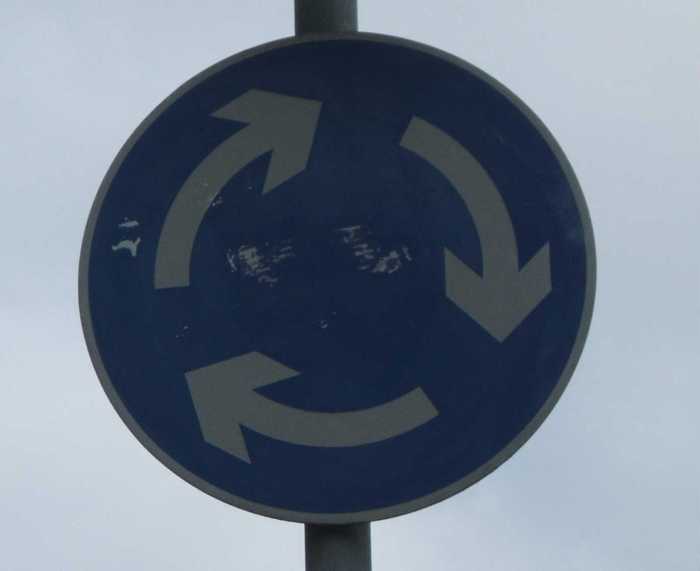 ‘Society’ is just the aggregate of individuals making individual choices – what else can there be? Yet when an individual makes a choice, it is not, and cannot be, made on a neutral playing-field, it is made in a social context which contains many cultural and social pressures – some of them almost irresistible. Yet these are created by other individuals … so … what on earth can be done?

This type of system problem is pervasive in environmental discussion and there isn’t a simple answer to the question of “what can I do?”. Here is my current position on the matter.

It is officially recognized that cycling and walking are a Good Thing. But this recognition is patchy and half-hearted, the consequences have not been properly thought through. If there was real political will to favour walking and cycling (backed up by fuss-free public transport), then it could be done – as shown by the Netherlands. And yes, a big part of that is infrastructure. Infrastructure is the primary thing. It won’t work to hope that enough people will stop driving and start using their legs because we persuade them to do so – we cannot persuade enough people to make enough difference. Persuasion is too slow a process and the current road conditions militate too strongly against it. At present, Cycletopia is a nice place to visit but seriously now, you couldn’t possibly live there.

But it might work to persuade enough people to start making a fuss about walking and cycling that sufficient political will starts to develop – you’d need fewer people to get this one moving. So ‘spreading the word’ is not a waste of time. ‘Advocacy’ can take many forms, but for best results it really might be useful to know a bit of this social-sciencey-behavioural stuff – otherwise you could just end up preaching or asking for the wrong things.

And of course, even when the political will is there, it’s not only about the infrastructure, even though that has to be top priority. The way I think of this is that all the ‘soft’ stuff – the training, the persuasion, the information giving – is like the lubrication of a machine. The oil can do absolutely nothing in itself, yet is essential for things to work properly. And if a machine is completely seized up it might be able to get it working again. So another reason to pay attention and try to get it right.