I’m cranking myself up to finish this blog, which was always intended to be a sort of year-long “writing exercise”, and I’ll be wrapping it up shortly. But here’s an anecdote I can’t resist.

I’ve talked previously about the idea that there is a sense in which we don’t “behave like drivers” or “cyclists” that we all have underlying psychological mechanicsm that mean we all “behave like traffic” – that is to say, revert to our basic bahaviour as walkers. I like to collect examples of this.

Well yesterday I saw a SMIDSY incident between two swimmers. It was at the Bristol lido which is very small and not really suitable for hyper-purposeful “training” and there are no lanes roped off or marked. Nevertheless, the few times I’ve been there recently, there are always a few people rather sternly ploughing up and down in a distinctly training-ish kind of way. Yesterday I heard a splash and then “words”. Clearly a collision had taken place and the bit of the exchange which I caught went:

First woman: I didn’t see you.

First woman [getting cross]: I didn’t see you!

First woman: I DID’NT SEE YOU!

Second woman [giving up and swimming off]: oh all right then …

There is just so much deconstruction one could do with this (why did the first woman get so indignant?) but the key psychobikeological points are:

1. it is quite natural to not look where you’re going, especially when you’ve got some other purpose at the forefront of your mind

2. this doesn’t really matter if you collide with someone of equal physical heft

3. if there is a significant physical mismatch then perhaps you have a greater duty of care. 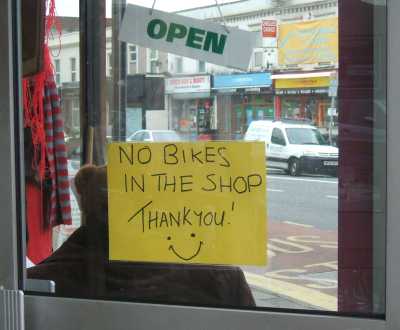 From this it appears that people actually try to take their bikes into a shop. I find this quite strange – it would just get in the way wouldn’t it? You might get oily marks on things. Honestly, some people. Tut.

But it might be an example of behaving like traffic – forgetting that the bike is an actual large lump of encumbering metal and thinking oneself a natural unencumbered pedestrian and behaving accordingly.

Or it could be an attempt to reduce the faff factor – all you want to do is pop into the shop for a quick nosey – 2 mins, tops – but if you have to faff about finding a bikestand and then faff around with a huge heavy lock, then it’s hardly worth it.

Our minds are amazing because they can do far, far more than they evolved to do (just look around you). Nevertheless that does not mean that they can do all these 21st century things easily, or particularly well, or with no practice. And the fact that the limits of our minds are to some extent unknown, does not mean that our minds are unlimited. ‘Evolutionary psychology’ gets laughed at, not because it suggests that we are in some ways constrained by our evolutionary history (of course we are), but because it can seem so over-confident in suggesting the precise ways in which it is so constrained. In other words, the criticism is not of the endeavour itself (provide behavioural explanations in an evolutionary framework) but of the flimsiness of some of the assertions which are presented as ‘findings’.

So with that in mind, let me try this one out on you.

Hom sap is a walker and runner. Natural selection has not had time to help us with the speeds now available to us from driving. So it is not unreasonable to suppose that our default behaviour in traffic of all kinds is in fact ‘walking behaviour’. That is to say, to drive (and to a much lesser extent, cycle), in order to cope with the extra danger created by speed, we need to have extra and/or different behaviour artificially trained into us (for example ‘mirror signal manoeuvre’ repeated endlessly during driving lessons). When that training slips or decays we will, by default, ‘behave like walkers’.

Continuing the ‘mirror signal manoeuvre’ example, when you are in pedestrian mode you don’t give explicit signals of your intentions to move or change direction. The reason seems obvious – at walking speed collisions very rarely happen and on the rare occasions that they do, almost never cause serious injury. Why are walking collisions so rare though? We don’t give conscious and explicit signals of intentions, but we do give unconscious and implicit signals – we read each other without thinking about it and more or less know what the people around us are going to do, without being consciously aware of this.

As a pedestrian, you cannot help but notice how many drivers don’t bother signalling. So much so, that the absence of a signal from a car is no indication that it not going to turn into your path. I would suggest that they are simply ‘behaving like walkers’, their driver training is not at that moment operational and it no more occurs to them to signal than it would to a pedestrian. They just unconsciously assume that their intentions are transparent – just as the intentions of a pedestrian actually are transparent to other pedestrians.

Another example is tailgating. I am a rather aggressive walker, prone to getting annoyed when held up behind a bunch of dozy tourists occupying the pavement, given to walking very close behind them, tutting impatiently and trying desperately to force a way through. This might be rude (thinking about it, this was definitely London behaviour) but it is not dangerous. Tailgating in a car is dangerous. Everyone knows, in some sort of theoretical way, that it is dangerous. Remember that chart of stopping distances on the back of the highway code? How often do you see the safe distances observed? Once again, I would suggest that the imposed driver training has switched off so it feels safe, just as it actually is safe to tailgate on foot.

So I would suggest that in the broadest sense we don’t behave like cyclists or behave like drivers; we all ‘behave like traffic’ – revert to our natural behaviour as walkers.

Does this have any campaigning relevance?

Indirectly. A quick online stroll will reveal huge amounts of shouting. Cyclists jumping red lights, dozy pedestrians who never look before stepping out, dumbass motorists who park on the pavement. Well shouting is great fun so please just get on with it. I quite like reading it sometimes. But shouting is all it is. It would be useful in campaigning effectively to be able to think strategically. Even though one’s own immediate situation is important, it is equally important to be able to think beyond it – and it gets us absolutely nowhere to start adopting a moralising tone or thinking of other people as stupid.

More importantly, although training is important and of course people can learn to do all sorts of new things, and learn to old things much better, even with this, perhaps one should beware of expecting training or education to pull too much weight. Folks will be folks.